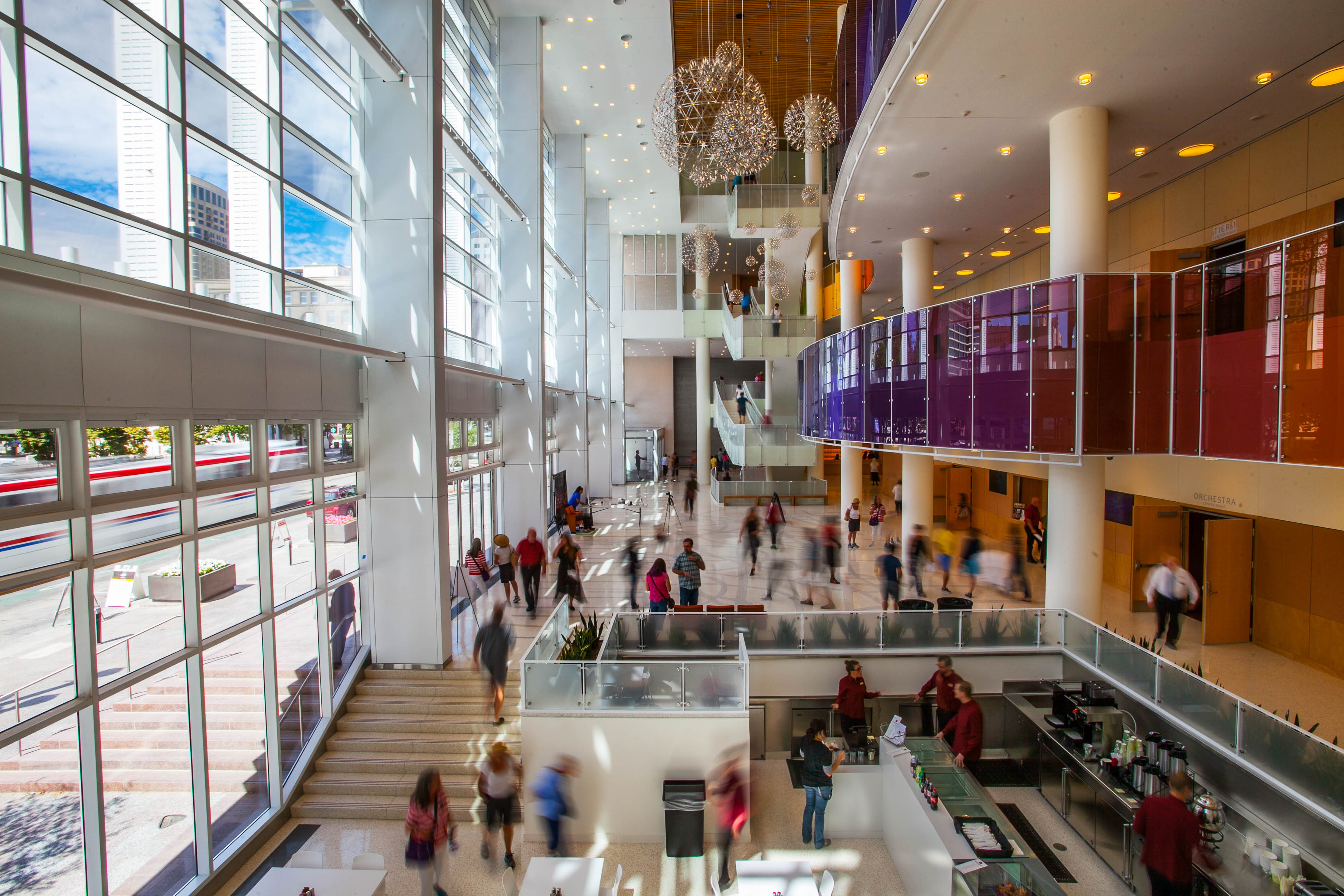 The George S. and Delores Dore Eccles Theater Development is a mixed-use public-private development project in the center of downtown Salt Lake City. The project included the master plan, coordination and concurrent development and construction of a privately developed 25-story, 450,000 square foot oﬃce tower and the programming, operating plan, design and construction on of a 186,000 square foot, 2500 seat Performing Arts Center, as well as the master plan for the redevelopment of the adjacent Regent Street as a pedestrian-oriented festival retail street adjacent to the theater and tower.

The project is unique in its tightly woven integration and connection with the surrounding urban development and infrastructure. The successful concurrent design and construction of the theater and tower required intense collaboration and coordination on the small inﬁll site. The tower design cantilevers forty-two feet over the theater at the fifth ﬂoor level and is supported from the top by a unique hat truss design. The two projects share conjoined lobbies and pedestrian access from both Main and Regent Streets. GTS led the collaboration of adjacent property owners, the private developer and the SLC-RDA, Salt Lake City and Salt Lake County as project participants. Additionally, GTS was responsible for recruiting a private developer to build the oﬃce tower on the adjacent property. The additional tax revenue of the oﬃce tower supported the bonds for the Regent Street Development. As the developer for the theater, GTS served as the catalyst and project leader to usher this transformative project to completion.

The new state-of-the-art performing arts center includes a 2,500-seat performance hall; a 150 seat “black box” theater; multiple venues for private and community events; and a stunning ﬁve-story Grand Lobby with retractable glass walls that invite the public to enjoy the space year-round. Its central location downtown attracted over 370,000 people in its first year of operation with an array of daytime and evening events. Each year the theater will host hundreds of performances including touring Broadway shows, major concerts and comedy acts, popular and family entertainment, as well as private and community events.

The Eccles Theater oﬀers the technical capabilities and seating capacity to bring the highest tier Broadway tours, as well as national concert tours, to Salt Lake City. The theater’s two performance venues provide a valuable addition to the cultural facilities available to our local arts organizations, as well as welcoming home for community programming that is open to a wide range of audiences. The theater will be a valuable economic driver for downtown. After creating 1,600 jobs and generating $200 million in county wide economic impact during construction, the theater has created an additional ongoing 115 permanent jobs and $16 million annual economic impact.

GTS coordinated, managed, and supervised the development of the Eccles Theater including advising and assisting the City in Operator contract negotiations; led the design team in the preparation of plans and specifications, schedules, and budgets; site identification and entitlements; and participated with the investment banking and legal team in structuring the project financing. GTS managed and participated in the fundraising and the solicitation of philanthropic and corporate sponsorships for the theater which has resulted in an additional $37.5M in donations and sponsorships to date.

The success of the project is seen in the recaptured vigor of downtown as a place to work, live and play. GTS Development and Steve Swisher deserve recognition for managing the organizational effort including operational studies, programming, design, construction and fund-raising to bring the theater to reality.

The thoughtful process that GTS uses to engage the community fosters open dialogue, allowing the projects they lead to truly serve and enhance the built environment for the communities in which they work.

GTS has extensive experience with complex capital projects, particularly in the urban core, is invaluable to the work of cities.

Find Us On Linkedin